An event that combines study, university research and the world of theater, to recover the cultural value of satire and popular comedy.
THEThe National Archaeological Museum of Taranto enhances the ancient Fliacian tradition and welcomes in an in-depth day those who study this form of art typical of ancient Magna Graecia and those who still draw stimulus and inspiration from that memory.
It is the synthesis of “Back in time. Taranto and the children “: a program of reports, theatrical performances, archeology and improvisation rehearsals, which on November 5th at 6.00 pm it will take place inside the Meeting Room of the MArTA.
An in-depth work resulting from multiple synergies: the research, education, conservation and enhancement work of the National Archaeological Museum of Taranto, the scientific research of Gabriella Capozza and Giulia Corrente, respectively researcher of the University of Bari “Aldo Moro” and PhD, and translation in contemporary theater with the CREST Theater Cooperative and the theater company “I Nuovi Scalzi” of Barletta. 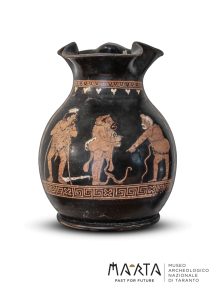 It is a scientific project that lays the foundations on the study “The reception of Magno-Greek phialic farces in the Apulian theatrical culture of the modern age with reflections in contemporary theater” by Gabriella Capozza, destined to give new light to a genre that was an expression of comic popular culture, but also a real liberating and collective rite against fears.
The theater of the fliaci (from the Gr. Φλύακες or “buffoons”) was an “original form of Magna Graecia theatricality, an ancient way of comic joke”, as the scholar Giulia Corrente will describe in her report. The examination of the literary fragments and of the vascular representations reveals that the Fliacian theater, in fact, drew its arguments both from the mythological patrimony and from the common life. The Fliacian genus seems to have been particularly favored in the city of Taranto; This is confirmed by archaeological research, which recognized Taranto as the major center, in the 4th century BC, of ​​pottery production of theatrical inspiration.
Alongside scientific research, the theatrical recovery project of CREST and of the “I Nuovi Scalzi” Company. A way to take up Rintone, the illustrations in the vascular iconography of many exhibits exhibited at the MArTA and make them not a re-enactment of the past, but a real “translation” into the contemporary world. The work conducted by the CREST Theater Cooperative, together with the company “I Nuovi Scalzi” will in fact also be transformed into dramaturgy for children. On the day of November 5, after the introduction of the works of the director of the MArTA, Eva Degl’Innocenti, the reports of the researcher of the University of Bari “Aldo Modo”, Gabriella Capozza on “I fliaci e la parodia” and of the scholar Giulia Corrente on “The children and the comic show in Magna Graecia”.
This will be followed by speeches by the President of the CREST theater cooperative, Clara Cottino and by Savino Maria Italiano, manager of the theater company “I Nuovi Scalzi”.
The actors will perform some themed improvisation scenes.

The event starting at 18.00 and ending at 19.30 is free but with reservation to be made on the MArTA e-ticketing platform at www.shopmuseomarta.it

‘Back in time. Taranto and the children – Corriere di Taranto