Production of the Teatro Colón decentralized to the Centro Cultural 25 de Mayo in Buenos Aires, Donizetti’s comic opera hits the mark with an enthusiastic and curious public who laughs at the antics and antics of the characters present:

Located in the heart of the Villa Urquiza district, the Centro Cultural 25 de Mayo is, by its size and the charm of period theatres, an ideal place for the chamber opera cycle of the Teatro Colón. Ôlyrix had already reported on quality shows in this context, including Powder Her Face by Thomas Adès, Armida by Lully and Mitridate of Mozart.

Quite rarely played in Europe (but covered by Ôlyrix in Lyon in 2017 and Geneva in 2018) and even more on the American continent, Long live mama! by Donizetti, subtitled Le convenienze ed inconvenienze teatraliis based on the principle of a mise en abyme representing singers, a composer, a librettist and an impresario who strive to create an imaginary opera, Romulus and Ersiliawhile the rivalries between the performers condemn this project to failure.

Adapted to the dimensions of the stage space, Pablo Maritano’s staging is dynamic, lively and effective, giving free rein to the gestural and vocal fantasies of the protagonists. The sets by Nicolás Boni and the costumes by María Emilia Tambutti judiciously set the plot in the 1960s, a time when the rivalries between divas, including the legendary ones between Maria Callas and the Tebaldi, made the history of the opera of the post-war period. Among other photos of major figures of lyrical singing from this period, their symbolic portraits adorn a rehearsal room which is also the scene of clashes, from a parodic angle, between the performers summoned to Romulus and Ersilia. 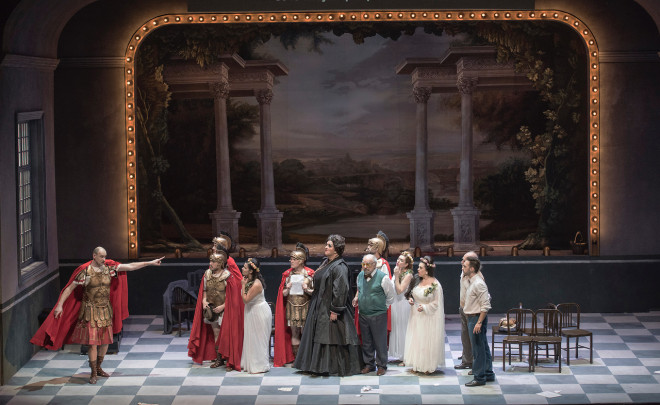 The soprano Marina Silva, here in the role of Garbinati after having interpreted Mimi, Arminda (La Finta Giardiniera) and Anna Gomez (The consul) impresses with the power and dramatic density of its vocal projections, signatures of the prima donna. The voice is clear, smooth and full. The timbre, homogeneous over the entire range, is nourished by a wide range. The theatrical investment draws a character character, colorful, which marks the distribution by its stage and vocal presence.

The second gave, Luigia Scannagalli, has to her credit, as her rank indicates, only a few interventions at the expense of Florencia Burgardt. This soprano nevertheless assumes her role by highlighting her articulatory, expressive and stylistic qualities. The voice is solid and well established to materialize the possible rivalry with its competitor, the prima donna.

The mezzo Estefanía Cap is a Dorotea who knows how to manifest with generosity in her voice and sincerity in the theatrical investment a role that her own character would have liked more consistent. In this sense, the duet of the 2nd act, left in part to the free appreciation of the singers for purposes of pastiche in Donizetti’s score, gives way to a ” Mira or Norma » (from Bellini’s classic) which sounds like Belcantist revenge for Luigia and Dorotea finally finding the occasion for outpourings and lyrical inflections which reveal unexpectedly colorful vocal capacities in Florencia Burgardt and Estefanía Cap.

The central and transvestite figure of Donna Agata Scanagalli, mom of the second gave for which she claims with force and conviction a more important place in the show, makes the break between the female and male roles. This mom eponymous is played by baritone Victor Torres (heard in Un Re in ascolto and Laborintus II by Berio, but who is just as good an interpreter of Monteverdi and Handel). This versatile singer does not hide his pleasure in making the public laugh, with great success, in a register that he seems particularly fond of. The consequent modulations of the articulatory fantasy and certain projections in the voice of falsetto (in a role mostly sung in a bass range) are oriented to trigger a vocal comedy that comes under a form of virtuosity. The acting and the facial expression reinforce the caricature of the Mamma, with great reinforcements of breast prostheses (literally), but it is a caricature that fits into the genre buffa, where the tendency to histrionism is not absent from an overall interpretation provoked or underpinned by the score and the libretto. Victor Torres finds in him a number of resources specific to the jester which help him in the vocal and physical characterization of his character.

Iván Maier (acclaimed in Falstaff and Theoroda) is a vocally convincing Guglielmo Antolstoinoloff. Her tenor voice, clear, luminous and syrupy, has something comforting in its stability. The challenge of making him sing in German an excerpt from Lohengrin of Wagner (the aria In Fernem Land “) in the pastiches of the 2nd act is masterfully raised, a notable performance producing a striking contrast with the universe of antics of the mom.

The baritone Alejandro Spies (Procolo Cornacchia), who sang Monteverdi and Menotti, is vocally firm support for his wife, the prima donna. The timbre is naturally matte and warm. The theatrical commitment makes his character both believable and laughable.

The impresario is sung by the young baritone Alejo Alvarez Castillo who finds relief in the vocal expression of the mercantile ambitions of his character. The inflections served by a high and decided voice know how to show authority, or even more subtly, perfectible authority.

Figures of Argentine opera such as the baritones Gustavo Gibert (the librettist) and Luis Gaeta (the composer), in turn comical Benoît in Bohemian in 2018 and 2022, draw on their experience to pepper their vocal and body expressions with earthy details that polish the luster of antics. The first, making his typewriter resonate in rhythm, is to be associated with the sparkling pianist on stage (Cecilia Fracchia): both complete the chiseled work of the 22 musicians of the orchestra in the pit who are as much guides as guides led by the alert and precise baton of Javier Mas, very interventionist in his intentions and his gestures.

When opera laughs at itself in Buenos Aires with Viva la mamma! by Donizetti – News…